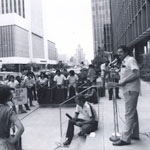 The six bilingual collections include: membership records and correspondence of the Alianza Hispano Americana, founded in Tucson, Arizona in 1894 as a mutual aid benefit society for Mexicans in the Arizona territory, featuring insurance documents that serve as legal evidence of financial transactions among members and within lodges; correspondence, subject files and ephemera from the League of United Latin American Citizens, formed in Corpus Christi, Texas in 1929, which is the oldest active organization of Hispanics in the United States and the Maricopa County Organizing Project, an entity which organized farm workers in Maricopa County, Arizona, both of which show strike strategies and union positions on matters such as health care, wage differentials, working conditions and negotiated labor contracts and agreements with growers; case files documenting job training and skill measurement activities from the Service, Employment and Redevelopment Project, which was a federal non-profit organization tasked with providing job training and education to the economically disadvantaged; and correspondence, journals, and other business transaction records of the United Steel Workers of America, Local 616 in Clifton, Arizona and the Arizona AFL-CIO which both document the civil, legal, and labor rights of workers including its Mexican American workers by revealing evidence of causes of deaths or injuries on the job and if subsequent medical treatment by company doctors was warranted.

Arizona, a U.S./Mexico border state; the Mexican state of Sonora; and the U.S. southwestern states of California, Colorado, Texas, and New Mexico.